Disneyland's Haunted Mansion celebrated it's 50th anniversary earlier this month. In honor of fifty years of spooky fun, we've put together a list of fun details, history, and trivia! Enjoy, and be sure to let us know you're favorite piece of Haunted Mansion trivia. We love to learn new Disney facts!


Walt Wanted the Mansion Scary on the Inside, but Not the Outside 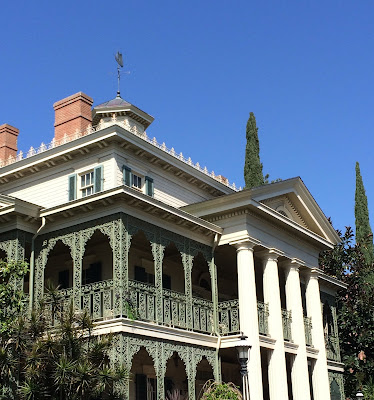 Original designs for the exterior of the Haunted Mansion had shattered windows, broken shutters, and even bats flying around. However, Walt Disney didn't like the idea of something so shabby being visible as you walk through the park so plans were changed so that it would look like a normal house on the outside, but be completely haunted on the inside.

There was a Five Hour Wait Time On Opening Day 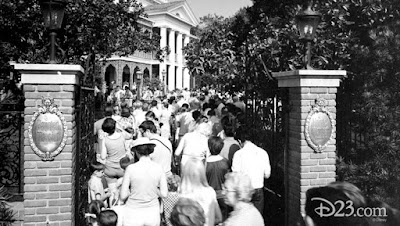 You think wait times are bad now? It's reported that on it's opening day, the line for the Haunted Mansion was up to five hours long and stretched back to Fantasyland! (Which btw makes the time I waited 3-4 hours for Indiana Jones and the line curved out of Adventureland, down Main Street, and wrapped into Frontierland seem much less impressive.)

The reason for all of this up and down is that the tracks to the Disneyland Railroad are literally in the way of a smooth ride. There's not much in the actual "Mansion" itself. Most of the attraction is in a rather large building backstage. But because the train runs directly behind the mansion, the workaround for imagineers was to have you go down an elevator (the stretching room), walk under the tracks (the hallway with the haunted portraits), go back up into the building that holds the main part of the attraction (going uphill into the Endless Hallway), go back down at the end to cross back under the train tracks (going down from the bride's room into the graveyard), then come back up to exit the ride (the escalator as you pass the "Hurry Back" ghost). That's a lot of work!!!

Extra Fun Fact!! This is why if you visit the Haunted Mansion in Walt Disney World, the ceiling lifts in the stretching portrait room. There's no need for you to go down!


If you've ever looked REALLY carefully during the ballroom scene, you may have noticed a spider sitting on a web. It's all the way on the left side before you leave the room, and it's at about eye level - so you won't notice it if you're looking down at the ghostly dancers. The spider is actually there to cover a crack in the glass! The piece of glass is so enormous that they'd actually have to lift it out through the roof so they've never fixed it. Rumor has it a kid with a BB gun shot at it, but there's no concrete info on what actually broke the window in the first place.

The Hatbox Ghost Returned Because They Could Finally Get it Right

When Disneyland brought back the Hatbox Ghost in 2015, some fans were confused as to why he was a big deal, other than being a super spooky ghost with an awesome special effect. The original ads for the Haunted Mansion back in the 60s all had the Hatbox Ghost prominently displayed on them. He was everywhere. But when the ride opened, the effect just wasn't right. There was too much ambient light for this face to fully disappear from either his body or the hatbox. It just didn't work, so he was quickly removed. Over the years he became a little bit of a legend, with some Disney fans remembering him but there being very little evidence he ever existed within the ride. Fast forward to Disneyland's Diamond Celebration and he returned with much fanfare now that the technology was there to really get the effect of his face leaving his body and appearing in his hatbox to be just as creepy as it was originally intended to be.


For the Hidden Mickey lovers: There's always a Mickey made out of the dishes on the table in the ballroom scene. It gets moved around once in a while, but it's always there somewhere.

Hidden Belle in the Bride Room


This one is newer and I honestly don't know how long it'll be around (much like the Lego Captain Jack Sparrow that used to be in the Pirates of the Caribbean), but there is a small figurine of Belle in the Bride's Attic room. I'm hoping it'll still be there when I next visit because I haven't seen this one there for myself. Have any of you?

Madame Leota is Actually an Imagineer


The floating head of Madame Leota is one of the most iconic images of the Haunted Mansion. While you may know that she is voiced by Disney legend Eleanor Audley (voice of Maleficent and Lady Tremaine), did you know that the face you see belongs to Imagineer Leota Toombs? Leota worked for Disney originally in the Ink and Paint department, and then as an Imagineer for classic attractions like Its a Small World, Pirates of the Caribbean, and the Haunted Mansion itself. She's also the model for the "Hurry Back" bride at the end of the ride (and the voice that time as well!).

Madame Leota in the Holiday Overlay is her Daughter


Keeping it in the family, the face of Madame Leota that's used in Haunted Mansion Holiday belongs to Leota Tooms' daughter, Kim Irvine (also an Imagineer!).

The Haunted Mansion is based off of a Real House 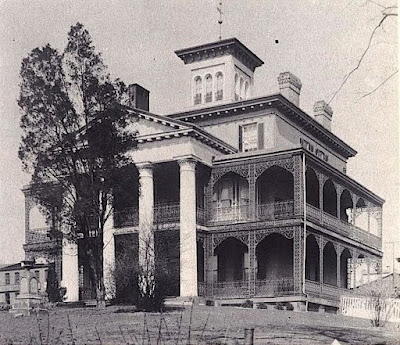 The exterior of the Haunted Mansion is based off the Shipley-Lydecker house in Baltimore, Maryland. Unfortunately the house is no longer standing, but you can see how it's practically identical to Disneyland's Haunted Mansion.