For those of us who visit Disneyland often, we sometimes feel like we've seen everything. But really, there's always a new little detail to find and the best ones are often interactive. So we've put together a list of our favorite, more unusual, interactive spots to check out! Have you seen all of these before? Anything we missed? Hit us up in the comments. 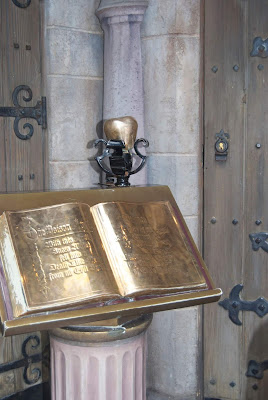 Let's start with my favorite, even if its a little more well known. Touch the golden apple at the entrance to Snow White's Scary Adventures to hear the witch's cackle. The best part of this being something that my kids love doing every trip is that we always manage to unintentionally show it to someone who didn't know about it. The surprised look on other guests' faces is my favorite part!

Sabor the Leopard in Tarzan's Treehouse 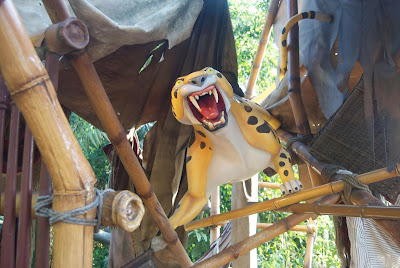 Get too close to Sabor and he'll roar so loudly you might just jump out of your skin! This is another one that's super fun to do to unsuspecting guests. Even if they're expecting it, it can still cause a pretty good scare.

Tinkerbell in the Peter Pan Queue

While you're waiting in the inevitable line for Peter Pan's Flight and looking for something fun to pass the time, open up the Play Disney app (available for iPhone and Android). There's a whole game you can play while in line, but the best part is when you come up to the lantern. The app will prompt you when it thinks you're getting close and ask you if you're there yet. 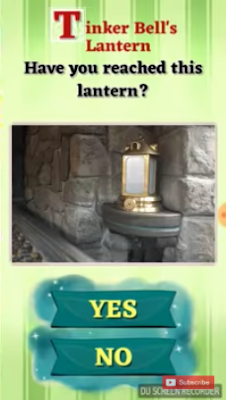 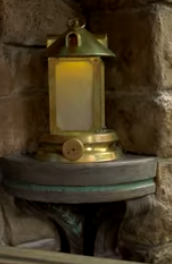 Once you're there and you say yes, get ready to make some magic happen. Here's comes Tinkerbell!!

**Pro Tip: The Play Disney app has some great games and interactive bits like this all throughout the parks. More info here!

Pull the Rope on Indiana Jones

When you're waiting in line for Indiana Jones you'll come up to a well with a rope going down inside. You'll hear a guy working inside and there's a sign that says "Do Not Pull Rope." Let me tell you...pull the rope!!!!

While we're still waiting in the Indy line, also keep an eye out for a narrow room that looks like its held up by a bamboo pole. When you walk by, pull on it to make the ceiling cave in on you! 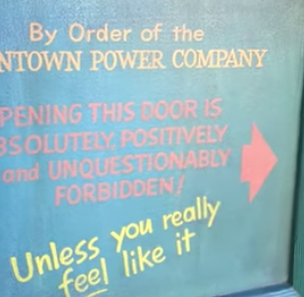 Toontown is often a neglected area, but it's so worth spending time in! There's a lot of interactive elements everythwere! Most are on the main road around the "town," and pretty easy to pick out. But my favorite spot is a little more off the beaten path. Head down the alley between Roger Rabbit and the Gag Factory store
. There are boxes all over that will make different sounds when you try to open them, there's a TNT box with a handle at the top (you might just make the fireworks factory explode!), and there's the coolest part...a big green door that says "By order of the Toontown Electric Company. Opening this door is absolutely, positively, and unquestionably forbidden. Unless you really feel like it." I strongly urge you to feel like it for a "shocking" surprise!


Let's stay in ToonTown for a minute...There is SO MUCH going on in the Roger Rabbit queue, it could be really easy to miss something. Next time you're going through, stop at the entrance to the Ink and Paint Club (where Jessica Rabbit performs in the movie). If you knock on the door, a huge set of eyes will peer out at you and ask for the password!

Everything in the Animation Building

Ok, this one is a little less specific, but it's really true. Go to the animation building in Hollywoodland in California Adventure! Aside from the killer lobby full of movie clips, pictures, and music, it's home to some very neglected but very fun activities! Head into the Sorcerer's Workshop to find out which Disney character is most like you, meet a 150 year old sea turtle and ask him your questions at Turtle Talk with Crush (my son asked the names of all of his kids with hilarious results!), and learn to draw a Disney or Pixar character at the Animation Academy. Really, you can't go wrong in this huge, interactive, air conditioned building! 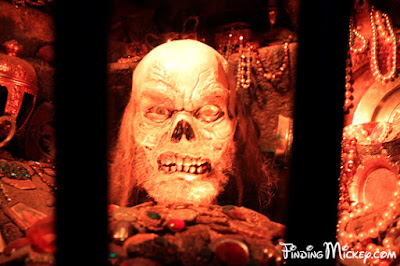 While you're wandering through the caves on Pirate's Lair (#TomSawyersIslandForever), there are a lot of cool details to spot, but take a look for Pintel's creepy head in the Dead Man's Grotto!