This is a weird one, I'll admit it. But I can't be the only one who loves all the different, appropriately themed garbage cans around Disneyland! There are cans for each land, and some rides and restaurants have their own designs. They're so popular that they even sell small porcelain cans as salt and pepper shakers!

Before we get to the trashy photos (see what I did there?), I have to tell you a story from my last trip...

My husband and older son were in line for the Matterhorn and they saw a garbage can on fire! It was near the smoking section, so I'm guessing someone threw away a cigarette that wasn't out. Cast Members came to put it out and take the old can away. I was sitting a little ways up giving my younger son a snack and saw a CM pushing a garbage can on a dolly. I didn't look damaged at all, which was weird considering it was on fire. I didn't even know there had been a fire until my hubby told me later. Anyway, he was talking to some guests and as he walked by I heard him say, "Guess how much it costs to replace one of these!" He took a few guesses before revealing the answer..... $800! At least they're cute and durable for that kind of money, right?

So let's take a trip around the Disneyland Resort, led by the garbage cans!

Main Street
My favorite thing about the Disneyland garbage cans is "Waste Please." It sounds like a request for wasting, and I've always thought it's hilarious. 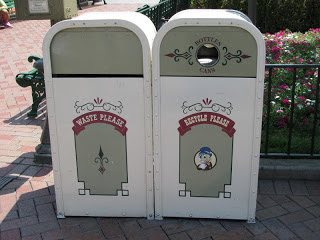 Adventureland
I really think these are my favorite. Such a cute design that fits in well with the land! 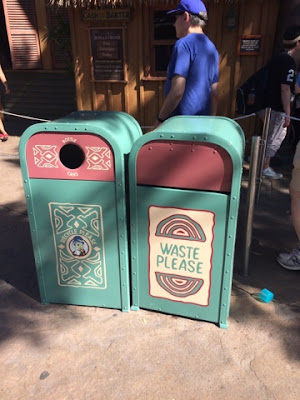 New Orleans Square
This can has special instructions for throwing away food, in perfectly themed font and color of course. 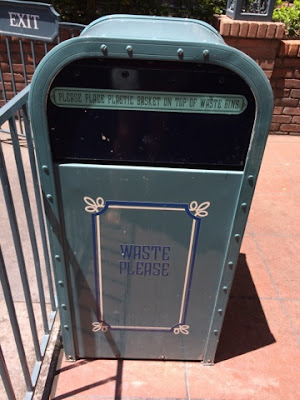 Frontierland
Metal garbage cans made to look like wood. Only at A Disney park, am I right? 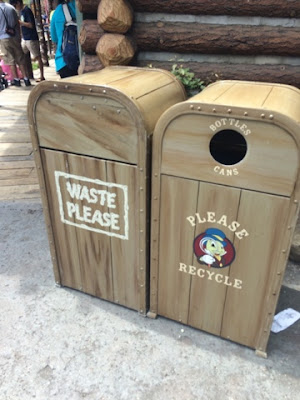 Fantasyland
Does it bug anyone else that there isn't paper recycling? Disney doesn't even sell cans! 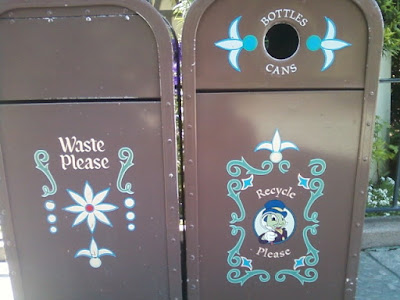 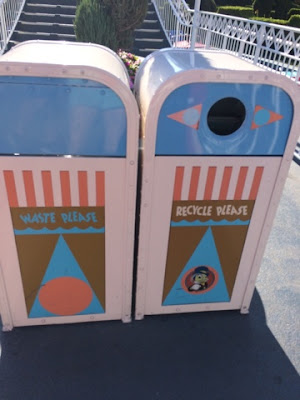 Toontown
A goofy design for the land Goofy lives in! 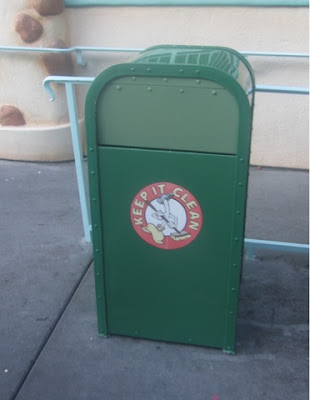 Tomorrowland
These are probably my least favorite. They're fine, just kind of plain. 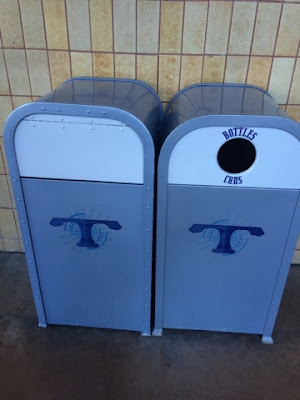 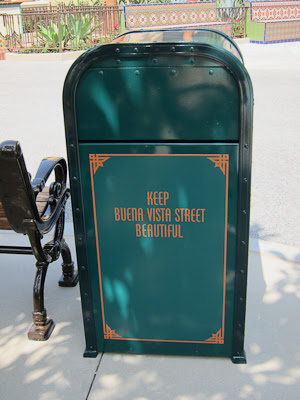 Fiddler, Fifer, and Practical Cafe
Disney Starbucks is the best place to go when you're waiting to get into the crazy line for a Radiator Springs Racers fastpass. 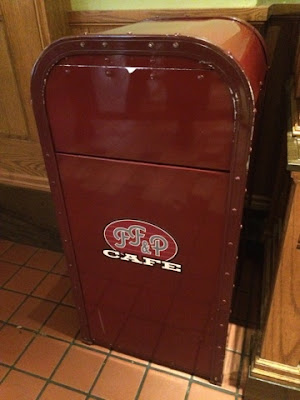 Hollywoodland
It seems like DCA just put the logo for each land on their garbage cans. It's just trash, I know, but it's a noticeable lack of effort that, I'm sure, someone spent a lot of time on in DL. 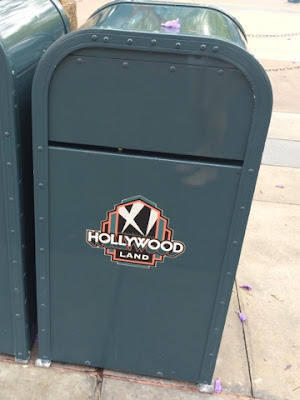 Monsters Inc
There are tons of garbage cans in line for this ride! It seems way more than other rides. At least they get their own cute logo! 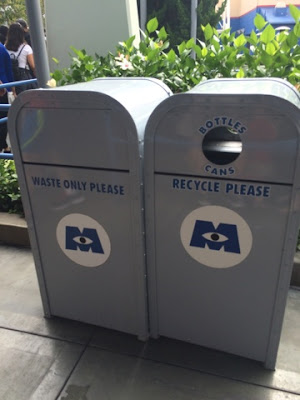 A Bug's Land
I'm not into the rides in Bug's Land, but it's so cute! 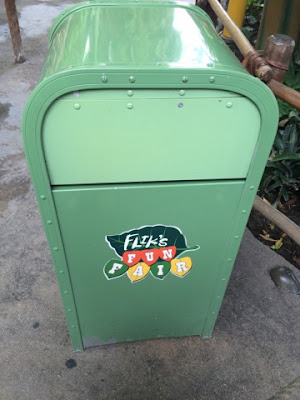 Cars Land
I'd be happy to keep your town clean, Radiator Springs! 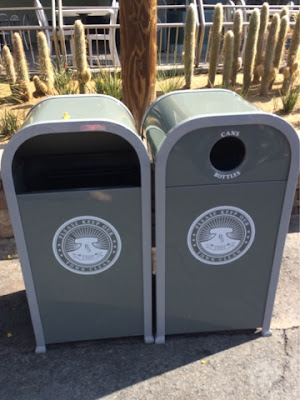 Pacific Wharf
Wow, these are so plain...I have nothing else to say. 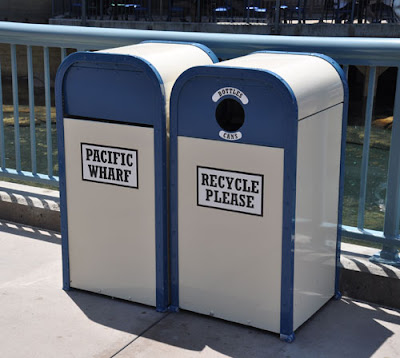 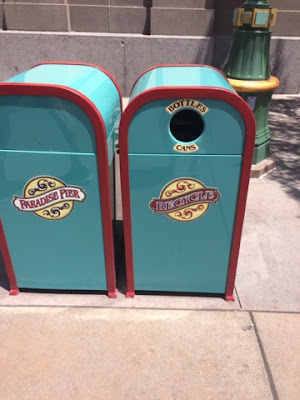 Grizzly Peak
I really like the way they've redone the Grizzly Peak area! 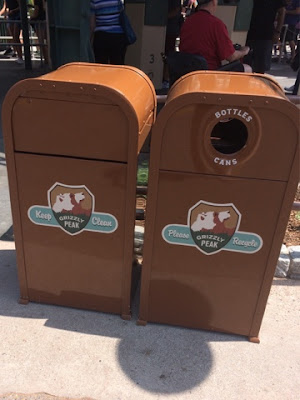 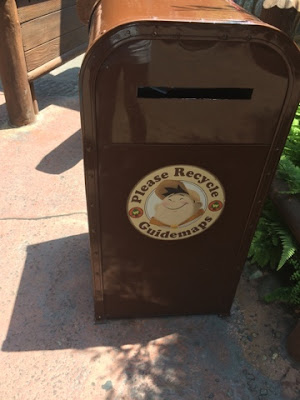 Bonus! My Disneyland garbage can pin!! 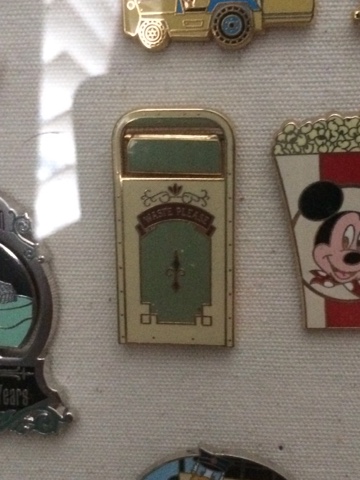