Halloween is Back at Disneyland!

I hope you're feeling spooky because Halloween has officially started at Disneyland! From new character costumes to the return of Oogie Boogie Bash, there's a lot to report on. Should we get started?? 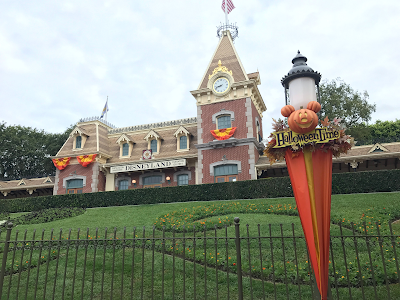 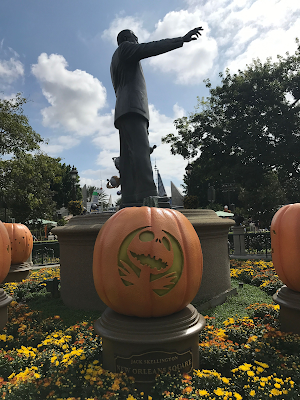 One of the best things about Disneyland at Halloween is the detailed decorative touches everywhere you go. Over on the Disneyland Park side you have the Mickey and Friends pumpkins as you walk through the turnstiles, the Festival of Pumpkins all along Main Street (featuring my favorite Elvis pumpkin at the music shop), and the Jack O Lanterns surrounding the Partners Statue. And you've only walked down Main Street! Head to Frontierland to find the very underrated Halloween Tree, inspired by the 1972 Ray Bradbury novel of the same name. Frontierland also has a fantastic Dia de los Muertos display! 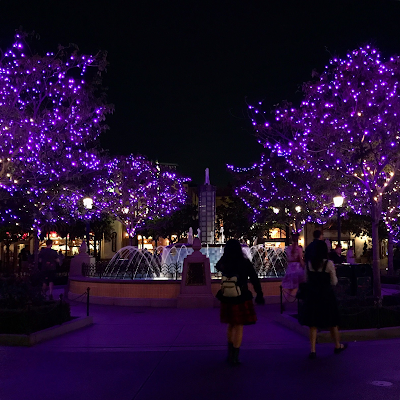 California Adventure doesn't disappoint when it comes to Halloween decorations either. At night, check out all of the very spooky purple lights in the trees along Buena Vista Street and into Carsland. Speaking of Carsland, they have a creepy spider car at Flo's that you can climb in for a perfect photo op plus lots of other car themed Halloween decorations sprinkled around.

While we're still thinking about Carsland, you can spot Lightning and Mater in costumes (sometimes Red and Cruz as well!). Over on Main Street you'll find Mickey and friends in NEW COSTUMES this year!! I love Donald dressed as candy corn.

My favorite part to talk about! Pizza Port has the Vampire Alien Macaron (with blackberry buttercream and lemon curd filling!). The French Market has a purple and green vanilla cake with raspberry mousse filling. While it looks amazing for photos, I can 100% guarantee it'll turn your teeth blue! Gibson Girl has a rocky road sundae with Halloween sprinkles. There's a super cute monster cake with eyeballs on the side at the Plaza Inn, and for the PSL fans there's a Pumpkin Spice funnel cake with caramel and toffee at the Stage Door Cafe. Speaking of funnel cake, there's an Oogie Boogie themed funnel cake at Award Wieners complete with gummy worms (my bugs!!). Lamplight Lounge has added ghost pepper nachos to their menu for Halloween - sounds spicy and delicious. And the Pacific Wharf Cappuccino Cart has an adorable pumpkin bundt cake.

ITS BACK!!!! Sorry for the caps but this is my all time favorite ride. And I'm totally here for the gingerbread house each year. This year it's themed to our favorite trick or treaters - Lock, Shock, and Barrel. I haven't seen it in person yet and couldn't find a great pic to share with you, but there's an awesome video that Disney Parks put out on TikTok where you get a good look. You don't see a guillotine in Disneyland too often. I'm excited! 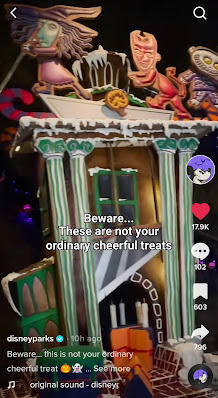 Continuing on with returning ride overlays, Guardians of the Galaxy: Monsters After Dark is back! During the day it continues to be the normal Mission Breakout, but after 3pm you get more monsters, more scary sound effects, and more darkness!

For anyone who doesn't want anything as scary as Monsters After Dark, you should head over to Carsland to see the Halloween overlays at Mater's and Luigi's. Both get new decorations and new songs to help celebrate the season in a more playful way.

Jack Skellington is your host for Halloween Screams - with fun music, projections, and actual fire. Keep in mind so you're not surprised, it looks like its projections only on weekdays with fireworks added in on weekends. Either way you'll have fun - if its anything like Mickey's Mix Magic, you get so immersed in the projections you might not even miss the fireworks.

Its already sold out so I hope you have your tickets if you wanted to go. Oogie Boogie Bash is back! On select nights, you'll have an amazing Halloween party in DCA starting at 6pm. If you have tickets for the party but not the park, you can enter starting at 3pm and you can come in costume! There are trick or treat trails that give major candy hauls, a special Halloween parade, and a Villains Grove at the Redwood Challenge Trail where you can spot your favorite bad guys. Keep in mind if you AREN'T GOING to Oogie Boogie Bash, watch the schedule online or on the Disneyland app so you can figure out how to best avoid it.